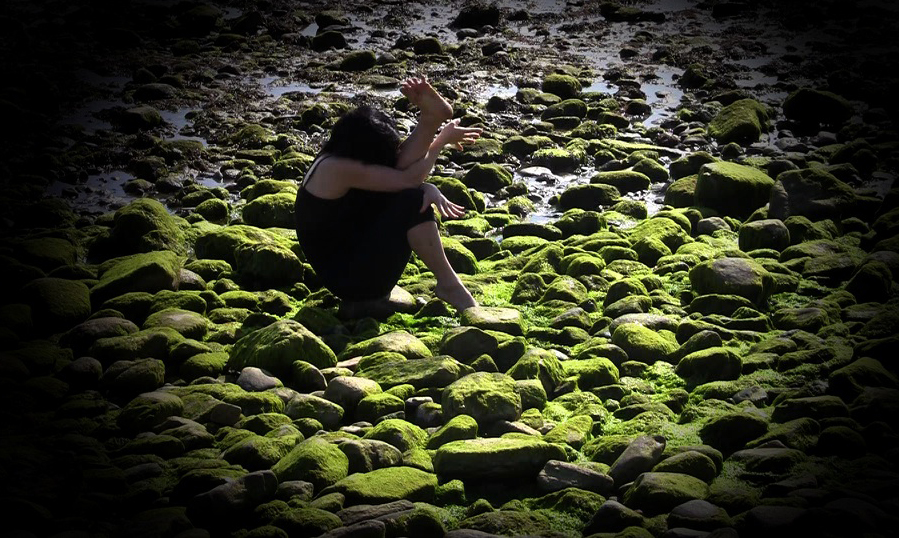 Liz Phillips explores the body electric, ground, and tides to reveal a fragile ecosystem. In this performance, titled  “Biyuu” (a Japanese word which mimics the sound of bamboo bending in the wind) Phillips teams up with Butoh Dancer, Mariko Endo Reynolds. Their investigation of the body in both potential energy fields and in nature—bamboo, tall reeds and water (recorded at the Edith Read Sanctuary) will be brought to the stage.

On the tuned stage Mariko’s body will become an antenna as she shifts shape, moving near ground and reaching out.  Her body will act as a conductor and the space around her will be activated, creating sound responses.  Phillips will translate, transpose and shift spectrums, activating water, sound and color formations as the projections fall on translucent paper scrims and the weather balloon. The paper will act sometimes as the loudspeaker, at other times as a sensor. As Mariko performs, she will move the weather balloon to capture images and transform the stage. Seen and unseen waves of water, sub audio, audio, radio frequency, ultrasonic and light will become tactile material as Liz creates a hypersensitive 3D sound and video installation which reinvents the performance landscape.

This project has been funded by many individuals through USA Projects, Parabola Arts Foundation, the David Bermant Foundation and Roulette.

New York-based artist Liz Phillips has been making interactive multi-media installations for the past 40 years. She creates responsive environments sensing wind, plants, fish, audience, dance, water, and food. Audio and visual art forms combine with new technologies to create elastic time-space constructs. Sound is the primary descriptive material.  Since 2000 many of her installations such as “Shaded Bandwidths” and “Echo-Location: Queens” have employed multiple human-scale video projections.

Phillips has exhibited at museums, alternative spaces, festivals, and public spaces including The Milwaukee Art Museum, Queens Museum of Art, The Jewish Museum, The Whitney Museum of American Art, the San Francisco Museum of Modern Art, the Spoleto Festival USA, the Walker Art Center, Lincoln Center Festival, Ars Electronica, Jacob’s Pillow, The Kitchen, Rene Block Gallery and Frederieke Taylor Gallery. Public spaces as diverse as an alternative energy site in a wind turbine (1981) in the South Bronx , the anchorage under the Brooklyn Bridge (2001), Peavy Plaza in Minneapolis and Art Park in Lewiston NY have all been the locations of site specific installations. Phillips has collaborated with the Merce Cunningham Dance Company, Nam June Paik, Alison Knowles, Yoshi Wada, Earl Howard, Simone Forti and Robert Kovich.  Her work was presented by Creative Time, the Cleveland Orchestra, IBM Japan, and the World Financial Center. Phillips received fellowships and grants including a Guggenheim Fellowship (1987), commissions from New York State Council on the Arts and National Endowment for the Arts. Phillips teaches workshops and lectures on Sound and Interactive Media, now at Purchase College. In the last ten years she has curated several exhibitions of emerging artists and women making installations with sound.

Mariko Endo Reynolds is a professional Japanese Butoh Dancer who trained in Tokyo with Akira Kasai, one of the co-founders of the Butoh movement.  She toured Japan and the United States as a principal dancer in one of Japan’s representative Butoh companies, Dairakudakan.  In addition to her foundation of dance, she has studied anthropology and energy healing, all which influence her approach to dance as a sculpture of consciousness.  Since moving to New York she has been active in many Butoh dance and multi-media projects. She is teaching Butohin Tanua Calamoneri’s Company SoGono Butoh Workshop.

For more information on Roulette Brooklyn:

Tickets can be purchased online:  www.roulette.org